Recently the older members all enjoyed practicing their speaking with a small competition! The members broke into pairs and had to learn a short dialogue off by heart, which they then performed in front of the whole class. Here you can see the winners, Ibou and Abdou, performing their piece. Their efforts won them both a fully stocked pencil case each.

I have been teaching here at Diapalante for over one month now, which has been plenty of time to get into the rhythm of the centre. Its rhythm is rather irregular, however; the teaching we do here is completely unlike any teaching done in the UK. The nature of the centre means we never know who will turn up when. We could have any number of people, of any age and any ability, on any given day. This of course presents its challenges, but it makes the work we do so much more rewarding!

The variety within the members and their abilities means that the lessons we teach differ massively. Within the same day, you could end up teaching the times tables, the colours in English, and how to structure an essay – sometimes even at the same time! And the size of classes is very diverse as well, as a lesson can have anywhere from 3 to 30 students. In general, however, the lessons tend to follow the same sort of pattern. With the very young members, we do basic arithmetic and reading, as well as some IT work. For the majority of the members, there are classes in English at various levels, with the more advanced students helping the ones who are struggling in the large mixed classes. There are also maths classes for those who need a bit of extra help outside of school. And for the members whose English is very advanced, we hold debates and discussions in English. On top of that, everyone can benefit from various arts and crafts, science, and practical lessons on our Maker Days, and there are also coding and computing classes, including Scratch Saturdays. Although we can never prepare specific lessons, a bank of pre-prepared exercises and an ability to think on your feet is indispensable. And the older members are always happy to help corral the younger ones if needed! Despite the challenges that we have to face teaching at the centre, it is incredibly rewarding. The feeling when you have a class of ten-year-olds silently working, when someone who previously struggled now understands, or even the knowledge that, to some people, the centre is their only opportunity to learn, all that makes the stress absolutely worth it.

The members themselves are obviously what the centre is all about and I have been thoroughly impressed by them. In the end, every single one of them is there to learn, and although some of the younger ones might need a bit of a push, even they will settle and learn with the right incentive! And the number of teenagers and adults who are all incredibly motivated and driven was the nicest surprise! They all enjoy participating in lessons, and (in the case of some of the younger members) playing at teacher! I can already see the improvement in some of the members, and I’m looking forward to helping and teaching them as the year progresses!

The first few weeks were certainly a struggle trying to set up the computer room but we got there in the end! In the meantime, I found a black wooden board in the store cupboard and so we gave it a much needed makeover. We now have our own diapalante board featuring a balloon for the student of the week, this month’s theme and also an English word of the day.

In the computer room we have been super busy so far! This year we have introduced ‘Scratch Saturday’s’ which the students are all really enjoying. Scratch is a user friendly introduction to computer coding which I know Liz has been keen to kick start this year. In Senegal there are many jobs available for young people in coding and so Diapalante is providing the initial introdution to the language of computers. I, personally, am not really interested in computers, however I am being swayed with this colourful and fun approach to computer coding. With temperamental wifi for the first half of term, it has been difficult to use the textbooks which all include internet based activities, so I have been writing a course based on the books, called Scratch Sans Internet. The students have been learning how to make to Sprites move around along the x and y axis, how to make them talk, how to change their colour and changing the backgounds of the games too. Below are some photos of the kids getting stuck in!

Not only have we been using Scratch but also the multitude of activities which don’t require the internet too. Now we have activities available on the computers which are graded level by level for all different abilities. Maths, English, French, Science and more, their abilites are bieng tested when it seems like they are simply playing a computer game. The most handy thing is they don’t require internet use. Often the students want to use the computers for browsing the interent, so convincing them to do 5 educational activities and then they can have 10 minutes of interent time is usually effective; sometimes they forget what they wanted to do on the computer in the first place!

With the rise of the internet and technology in Senegal, young people are being more exposed to the world outside of Senegal. There are, obviously both positive an negative impacts of the Internet and social media and I was keen for the students to understand and be aware of the risks. This sparked an idea of having a debate once a week surrounding different issues. The debate of the dangers of Facebook became real when they had not heard the phrase cyber-bullying before. We mapped out the dangers on the board and debated their validity. Below is a photo of our debate board! 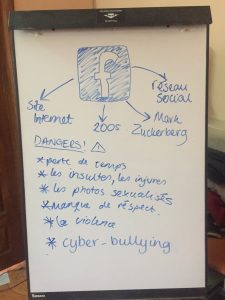 The computer room is also a hub for lessons. The projector and screen have been used on almost a daily basis as a key learning tool. I teach many different levels of English using these tools and thanks to the new projector remotes I can stand confidently at the front of the class and use TESOL techniques to teach. The use of powerpoint is a technique which teachers at Primary level up to University use and it is very effective. Playing games and having competitions makes the classroom environment all the more exciting and this is something I continually try to master with the help of Diapalante’s up to date technology.

The internet has been used frequently by the students and is, unsurprisingly, one of Diapalante’s most popular assets. In the first few weeks of opening we were learning about the continents in the world. We chose to study Africa, and Senegal as a country within that. The boys created a fact sheet using internet research. Here they are working hard! 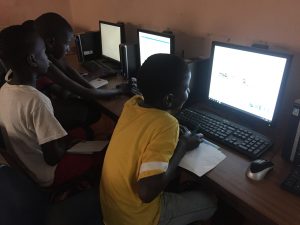 Overall, from my first two months with Diapalante Senegal it has been tough trying to juggle planning, teaching and sorting computers with the daily struggles of living in the crawy [crazy] country of Senegal but we are getting there! Bring it on!

Salaamaalakum !
After a hectic few weeks, we have finally found 5 minutes to introduce ourselves. The centre now knows us (Corran and Polly) as Awa and Mame Diara and it is so exciting to be open for business. It has been a tough few weeks acclimatising to the heat and the bites… mosquitoes, we see you! However, we’re loving working at the centre – it’s challenging but so incredibly rewarding, and the members are all amazing!

My name is Polly and I live in the Scottish Borders. I live at home with my family and our conglomeration of animals. I completed my A Level examinations in June and am currently waiting for replies to my university application. I chose Project Trust as they are the only gap year charity that sends volunteers overseas for a year. Senegal was always my number one choice at it is a francophone country and as such I have applied to do BA Modern Languages at University. In May, I was told that was going to Senegal with Diapalante Senegal and it was at that point that it really began to feel real! Having never even left Europe before, the prospect of living in a different continent approximately 3000 miles from home was daunting and in all honesty it is still daunting for me now! Bring on the next year!

Hi, I’m Awa, formerly known as Corran, and I’m from the North-East of Scotland. I’m a linguist at heart, and am hoping to study English Literature and Linguistics when I come back. I’m in charge of the library here at Diapalante, although I do my fair share of teaching as well! I love reading, and English, and am hoping to pass on some of that love to the members here. I’m really looking forward to seeing how the members’ English will improve throughout the year (and how many Scottish idioms they accidentally pick up!). As well as being interested in languages, I also really enjoy both Maths and Physics, and am relishing the opportunity to try and make these traditionally difficult subjects more accessible to the members!