Everyone at Diapalante had a lot of fun creating our very own t-shirts! We used iron-on decals to print the Diapalante logo onto white t-shirts, and after some experimentation we perfected it, and create our very own Diapalante Centre T-shirt! 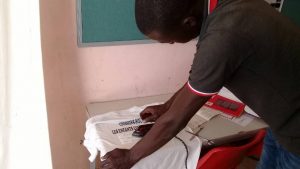 Some experimentation was required to get the logo perfect! 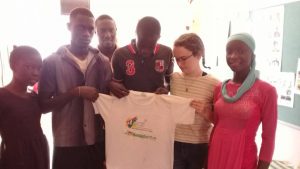 Celebrated every year on the 5th June, World Environment Day is organised by the United Nations to help raise awareness for the protection of the environment. Every year the campaign has a theme – this year’s theme was ‘Beat Plastic Pollution’, encouraging people to reduce their use of disposable plastics.

Here at Diapalante, we wanted to educate our members about the environment, and why it’s important to look after it! Two of our younger members (Abdou, age 14, and Fallou, age 14) lead a discussion about the environment, covering everything from what exactly the environment is, to why it is our responsibility to protect it. This involved members of all ages, and everyone had the chance to contribute and learn something new! 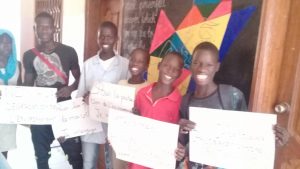 Some of the members with posters showing what they learned after their discussion!

We incorporated the day into our other lessons, specifically IT. For some of the younger kids, we had a typing race, where they had to retype out a text about World Environment Day. The first person to finish with less than five errors won, and safe to say the atmosphere got very competitive! 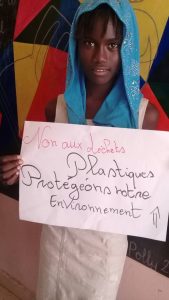 “No to plastic rubbish – Protect our environment”

Here at Diapalante, we try to teach across all the subjects, often covering different ones at the same time. As part of our theme of citizenship, some of the members had the opportunity to improve both their English and their IT skills by responding to the question, ‘Why was the Diapalante Centre created?’. Here is the response from Fallou Diop, aged 15;

Diapalante is a national educational centre where there are lots of students. At the same time, it allows us to do lots of things like: maths lessons, English lessons and French lessons.

Here in Senegal, we are in the middle of the month-long celebration of Ramadan. This means that for the next month, all Muslims who are physically able will be neither eating nor drinking between 5am and 7pm. This includes Master P and a large majority of the members at Diapalante, and I have been fasting along with them most days! For me, it has been both an amazing opportunity to better understand Islam and a great way to feel close to the community. However, not eating or drinking at all during the day obviously has several consequences for the centre!

First of all, we have changed our opening hours. Like before, we still open at 11am. However, as nobody will be cooking/eating lunch, we no longer close for lunch time. Instead, we have an hour’s rest at 2pm, when no lessons are taught, but the centre is still open. We also close a lot earlier, at roughly 5pm, to let people get home in time to break the fast at 7! As well as practical reasons, the reduction in hours has another advantage; during Ramadan, everyone is (quite rightly) a lot more tired than before. Fasting all day can increase fatigue and decrease concentration in both pupils and teachers, and lots of our older students are also doing exams at school! This means that the members, although still keen to learn, are often very exhausted. To distract them from their hunger, we often play some simple and fun games, like Ludo and maths colouring in during the quieter periods! 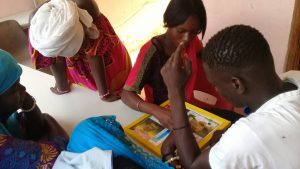 Some members enjoying football-themed Ludo during a break! 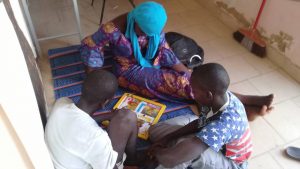 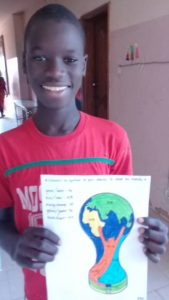 Here at Diapalante, we teach a range of subjects, often covering different ones at the same time. As part of our theme of citizenship, some of the members had the opportunity to improve both their English and their IT skills by responding to the question, ‘Why was Diapalante Centre created?’. Here is the response of  Abdou Seck, aged 14;

Diapalante Centre was created in 2010 to teach adults and children who have a problem with understanding or something else. It was created to better help the students who have a weakness in a subject like:

What do you do here at Diapalante?

I came to Diapalante when I was in CM2 (?). I had a problem with understanding in English but since I joined Diapalante I have mastered English as if it was my official language. I thank you.

I like Diapalante because people study something which they can use in the future, and it will be able to serve us.

What can we do to help Diapalante? 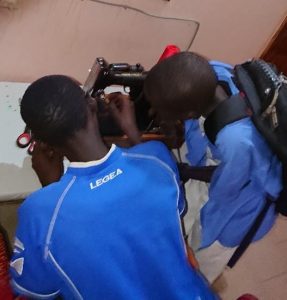 Abdou is a member of the team who fundraise for Diapalante by sewing items for sale in our online shop. 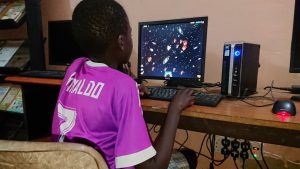 Abdou is also a member of the computer crew who maintain the Centre’s computer network.

Recently at Diapalante, we have been working with members of all ages on the subject of ‘Respect’. This included discussions on what exactly is respect, different types of respect, and how everyone can respect Diapalante Centre, the staff, and the other members! With some of the younger members, this culminated in a debate on what to do if someone disrespects another member. For older members, their work on respect combined with an IT lesson, and they learned how to use Microsoft Word to write a piece on somebody they respect. 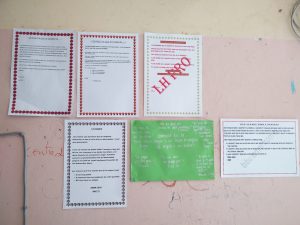 A variety of posters on respect. 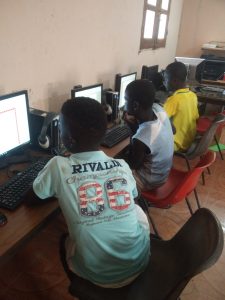 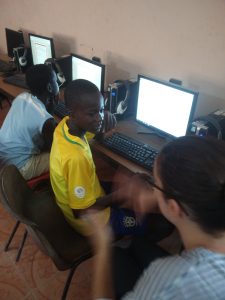 Helping a beginner with Microsoft Word. 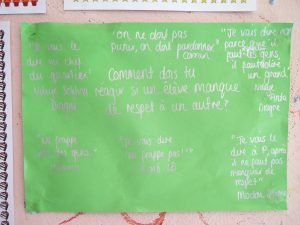 ‘How should you react if a pupil disrespects another?’

At the Diapalante Community Education Centre the younger members enthusiastically set about making hexaflexagons quite unaware that, as well as a fun craft puzzle, they were doing a maths activity. It was a rewarding exercise, the hexaflexagons got everbody asking questions and trying to work out the answers with their friends.

The first challenge was to follow the instructions to glue and fold the paper template to get from the row of triangles to the hexaflexagon. Then we had to work out how to flex the hexaflexagon to reveal its hidden surfaces. The flexing bit was easiest for those who were accurate in cutting, folding and gluing. But, with perseverance, we all got to a shape which flexed.


Some maths was introduced by the session leaders, and some by the children:
What is this six sided shape called?
A regular hexagon is made up of how many equilateral triangles?
How many colours of triangles did we start with?
Why can’t we see them all now?
Where are the other colours hiding?

If you have never tried this, have a go. Hexaflexagon template.

After being shown a YouTube video, our youngsters were challenged to create a balloon powered racing car. With a prize for the best decorated and a prize for the car which travelled furthest they set to work with a will and were successful in creating a whole range of stylish working cars.

This year power cuts are a regular occurance. The computers are holted instantly but often other activities can carry on as normal. Here is an evening English lesson using mobile phones as torches! 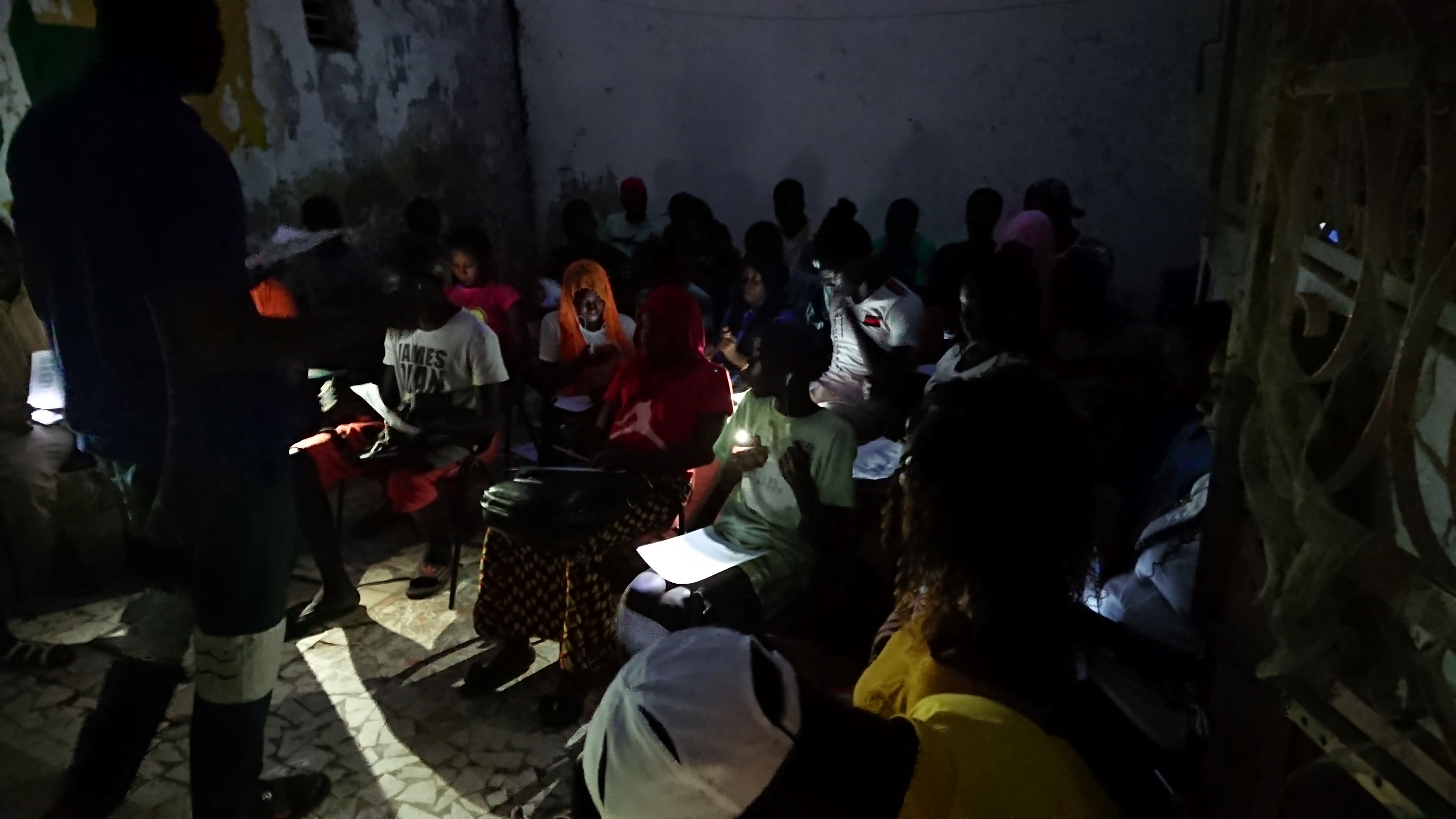 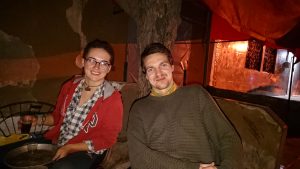 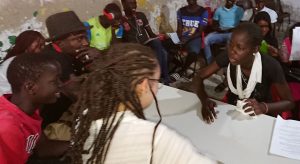 This blog is written by volunteers and members from the Diapalante Community Education Centre in Kaolack, Senegal. We hope you will enjoy reading it.

In Senegal local languages, predominantly Wolof, are used in daily life. French is the official language and the language used in school. However English skills are important, both in commerce and in other careers. English is therefore a core part of many of the activities for the older children and adults at the Centre.