The theme for January here at Diapalante centre was sport, and despite (or perhaps because of) the cold, the members approached it with enthusiasm. We kicked off the month with help from some guests from Joal who had come up for the weekend. Members of all ages came to the pitches of the local middle school, and we held a tournament of ‘ballon pannier’. Ballon pannier is a local sport, very similar to basketball and netball, but with a person holding a bucket in place of a net. Both male and female members got very competitive, and the session ended with Master P leading a cool-down exercise. The following week, we held a football tournament for all of the younger members. Again, both male and female members became very competitive, with inter-team rivalry running high. 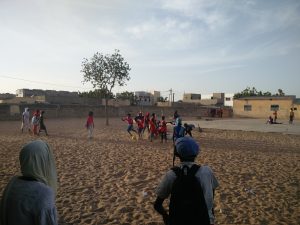 In the classroom, Master P led a series of sports-themed English lessons, including reading and listening activities, and covering topics such as ‘My favourite sport’ and sporting routines. And in the computer room, we had a poster competition for the younger members. In teams of four or five, members had to pick and then research a sport of their choice. Their posters included both a description of the sport and a famous player. The posters were written in French, but one very determined group wrote their poster, on rugby, entirely in English! There were also sports-related worksheets and lessons to encourage them to think about why we play sports.