Diapalante Centre saw out the end of 2017 with a bang, hosting our very own Talent Show! Held over an evening, it was an amazing opportunity to showcase the members’ talents outside the academic. The members  were buzzing with energy all week as the various acts practiced both in and out of the centre. Ranging from dance troupes and comedy to poetry reading and acting, members of all ages and abilities were keen to show off there talents. The evening was a great success, with every act showing how hard work really does pay off. The audience was made up of both current and former members, as well as some friends and family. Although every act was spectacular, there could of course be only one winner. Whilst the panel of judges, made up of members, made their decision, Master P treated the rest of the audience to some magic tricks. And then, time for results! After much suspense, the winners were announced, and they claimed their prize; a massive bag of toffee sweets. Afterwards, there were refreshments for all of the acts and the audience. Here are some of the highlights: 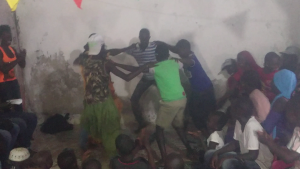 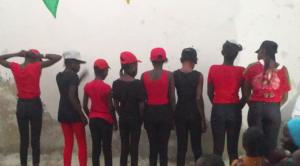 The girls went all out with their colour-coordination. 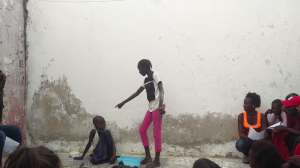 The audience was treated to some comedic drama in Wolof – apparently it was very funny.